The Basque people are true meat lovers who, for hundreds of years, have enjoyed the ritual of gathering around a grill and a fantastic red meat txuleton. That is why they celebrate the cooking of such an exceptional animal and pay it homage every year.

As the wonderful autumn season unfolds, with it comes the Txuleton Gastronomic Season at Sagardi, The Basque Country’s annual celebration of this beloved and culturally important meat.

There are three weeks of gastronomic festival surrounding the Basque Txuleton, the Basque grill and the classic Tolosaldea Menu, which includes hand-peeled and wood-roasted Piquillo Peppers and of course, the simple, yet incredible black beans from Tolosa.

In celebration of this special culinary event, SAGARDI London is launching a delectable Tolosaldea menu from Monday 20th November while stocks last. 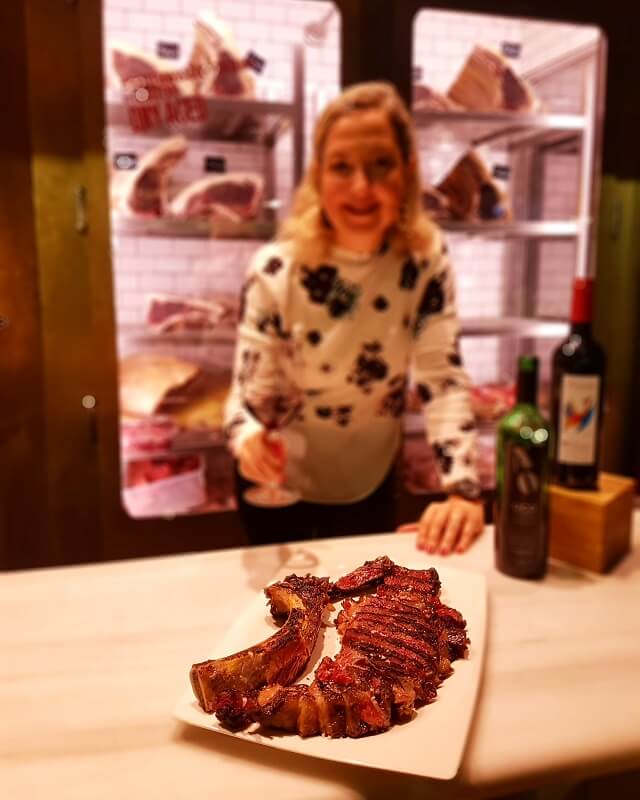 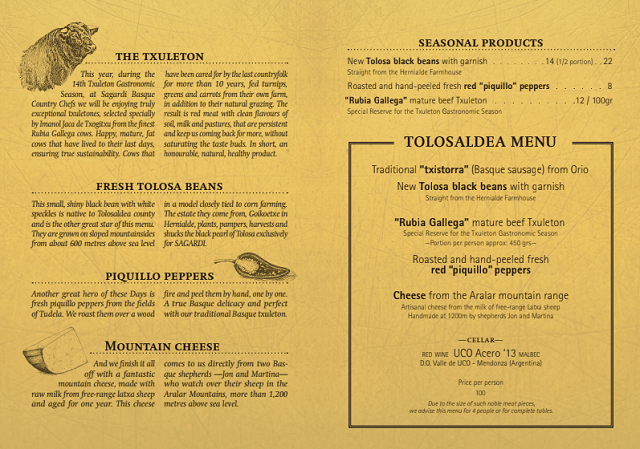 The Tolosaldea menu costs £100 per person and is recommended for 4 people and entire tables. Customers can also reserve cuts Txuleton when booking into the restaurant during Txuleton Gastronomic Season. 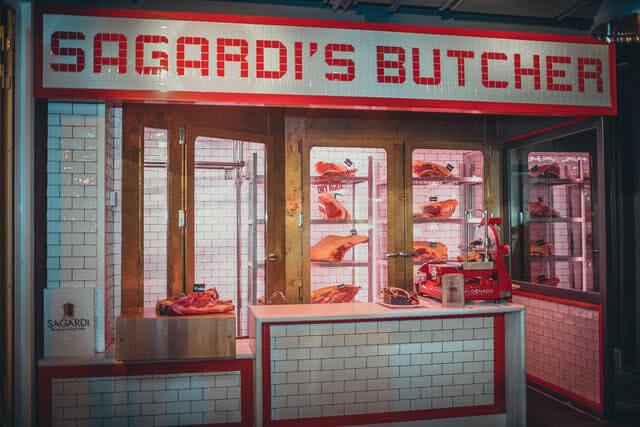 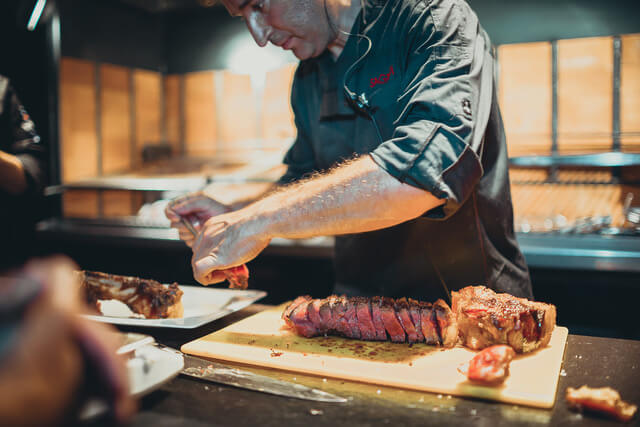 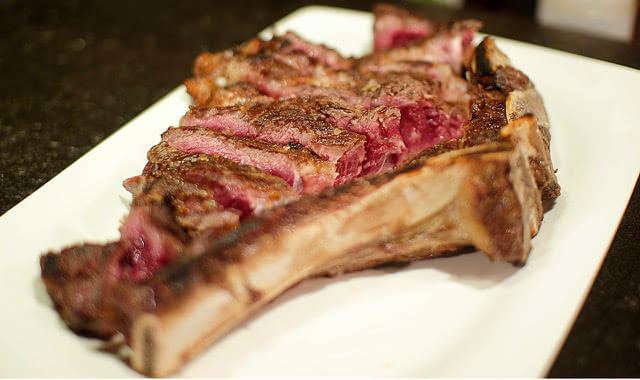 The quality of these special txuletones is supreme and practically impossible to find in any other restaurant. The secret to exceptional meat lies in giving the animals totally natural feed and exquisite care from the time they are born. These factors create a marbled, streaky piece of meat covered with a natural layer of fat with aromas of grass and fresh wheat.

This year, during the 14th Txuleton Gastronomic Season, at Sagardi Cocineros Vascos we will be enjoying truly exceptional txuletones, selected specially by Imanol Jaca de Txogitxu from the finest Rubia Gallega cows. These happy, mature, healthy cows have lived naturally to their very last days, ensuring true sustainability. They have been cared for by country folk for more than 10 years and fed turnips, greens and carrots from their own farm, in addition to their natural grazing. The result is red meat with clean and wholesome flavours that keep us coming back for more, without overwhelming the taste buds.

We don’t know exactly how long Txuletones have been eaten in the Basque Country; we do however know that since the 18th century it has been a gastronomic and festive event in certain rural areas of Bizkaia and Gipuzkoa.

Bovine animals, both male and female, had a very clear role in the economy of the homestead: females would dedicate their lives to giving birth and producing milk; as to the males, one was always designated to mate with cows, and others would be used for the many and very heavy labours of the homestead, land and mountain.

All of these animals were the greatest treasure and main source of sustenance for the extended families at the homestead. They were treated much like any other member of the family, they each had a name, quirks well known by everyone at home, and they were fed and loved.

The difference in the Basque Country was that, when these animals reached old age and their productivity started to wane or completely come to an end, they were still kept in the very same conditions, sometimes for over a year. During this period, without any kind of exploitation or activity, the animals would digest and accumulate all the nutrients in their bodies, thus gaining weight and having all the natural fats from homemade food infiltrate their muscles.

At the end of this period, the animal would be killed. All of its parts would be used as the main ingredient of myriad recipes that are now fundamental to Basque cuisine. The loins, the highest valued cut, were shared in communal parties where they would be grilled on large grills and enjoyed as a community.

To this day there is no knowledge of any other race that would have this special ritual of caring for, preparing, and then grilling and sharing a cow in this way.

After the sacrifice, the animal must remain cold and resting to allow all the cells to die. Just like any other animal, the cow goes into a state of “rigor mortis” which would usually last the first week after the sacrifice. We would then commence with the meat maturation stage.

The main objective of this process is to allow the muscles to relax and for all the superficial and infiltrated fats to blend into the meat, as well as letting the natural chemical processes take place. This process should be done in a ventilated cold chamber, between 1º and 3º celsius and 70% humidity. According to Basque tradition, this period may last between 2 to 5 weeks depending on the quality, size and type of fat. This will result in a wonderfully flavoured, earthy meat.

It is ideal to use the traditional Basque grill to cook a Txuleton. The charcoal grill originated from the old town grillers and has continued to evolve and be perfected through experience and the input of many experienced Basque grill masters.

The grill needs to be extremely hot, so at SAGARDI Basque Country Chefs we use at least 20 or 30 kilos of fuel, even when grilling just two txuleton. The grill is fired up and left until really hot so any flames have completely disappeared. This is when the meat can be put on the grill. The loin, along with the rib bone, should be cut to at least 4 centimetres thick. It’s very important that the steak is brought up to room temperature for at least two hours before grilling.

During the first phase of the grilling process we are looking to seal the meat so that all its juices are locked inside. The meat is then placed on the grill until both sides are golden in colour. Salt should only be added to the grilled, golden side, never to the raw side; this would extract all the juices. At Sagardi Basque Country Chefs we use thick cut, clean sea salt.

During the second phase we are looking for the inside fats and juices to fuse and preserve. Finally the meat is moved to a cooler area of the grill and flipped over a couple of times on each side before it is ready for the table.

“It is our mission to show, outside of the Basque Country, the values of our traditional gastronomy. Our cuisine is product-driven, it conjures up flavours us Basques always have at the back of our minds from our childhood.”

Iñaki and Mikel have always described themselves as lovers of cooking. They have been obsessed with traditional Basque cuisine ever since they were children and their ‘amona’ (grandmother in Basque) taught them how to cook.

More than twenty five years ago, they opened the restaurant IRATI in Barcelona with international expansion as their main goal.
IRATI is now a bastion of Basque cuisine in the Catalan city and was the seed of SAGARDI Basque Country Chefs, their most ambitious project, through which they aim to spread Basque gastronomic culture beyond borders in more than nine cities.