‎Kalkan Public Beach, also known as Municipal Public Beach, is located in the very center of Kalkan and has a very clean and turquoise sea. The sea is always cyrstal clear due to the pebbly structure of the beach. The beach is quite well maintained and clean. There is no entrance fee and the showers are free as well. Those who want to rent ‎‎sunbeds and umbrellas‎‎ must pay ‎‎40 TL‎‎ for each.‎ 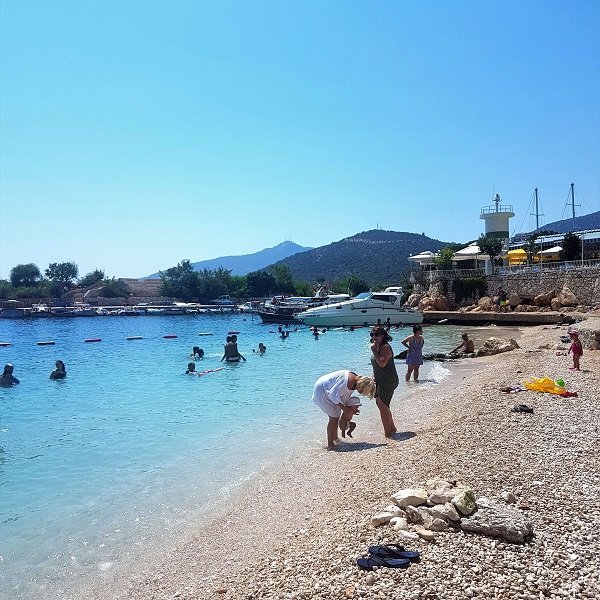 Located on the coastal road between Kaş and Kalkan, just 6 km from Kalkan,‎Kaputaş Beach is at the top of the ‎‎list of the most beautiful beaches in Turkey‎‎, with magnificently beautiful colored sea. It may seem difficult to go up and down 190 steps to reach Kaputaş, but believe me, it is worth it. There is also a café restaurant on the beach, which is run by Kas Municipality. There is no entrance fee and the showers are free as well. Those who want to rent ‎‎sunbeds and umbrellas‎‎ must pay ‎‎40 TL‎‎ for each.‎ 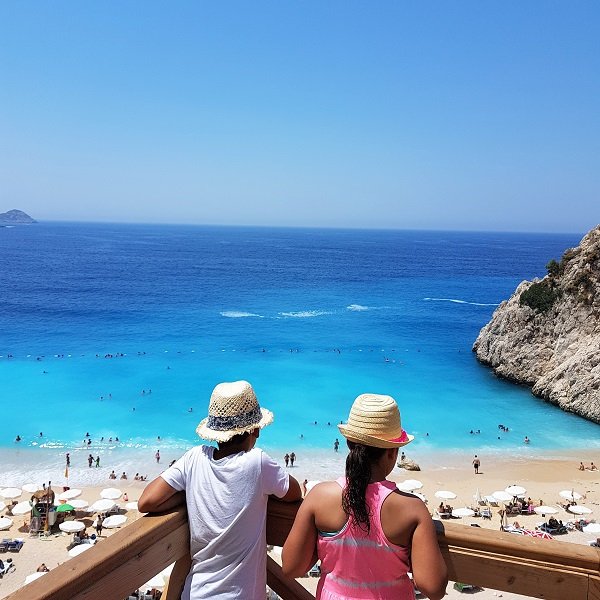 ‎Apart from the tiny pepple beach, Palm Beach Club Kalkan  provides access to sea from the platform area ‎like the majority of beaches in Kalkan. At the top of the platform area, the ‎‎sun loungers under the olive trees‎‎ offer both the possibility of cooling off on hot summer days and an isolated relaxation area. Shrimp penne is my favorite at the restaurant where the food served  is  much more successful than standard beach food. The up to date entrance fee to Palm Beach Kalkan ‎‎is only 90 TL‎‎. This includes umbrellas, sun loungers and parking.‎ 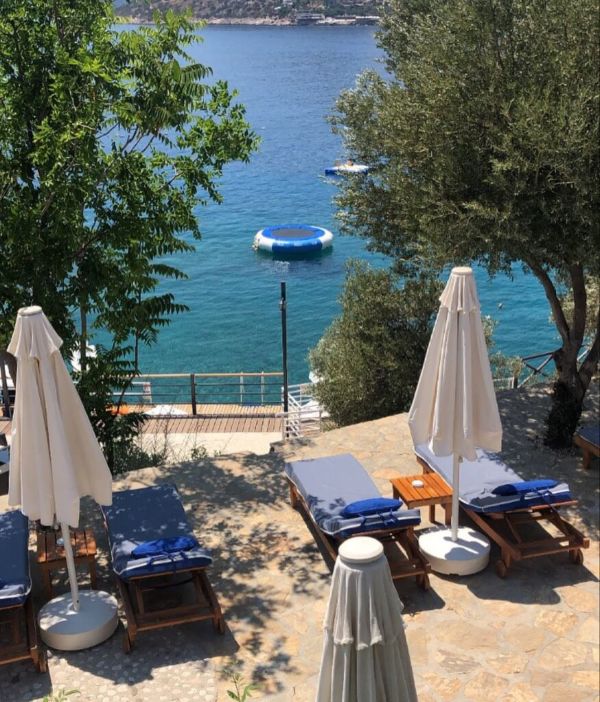 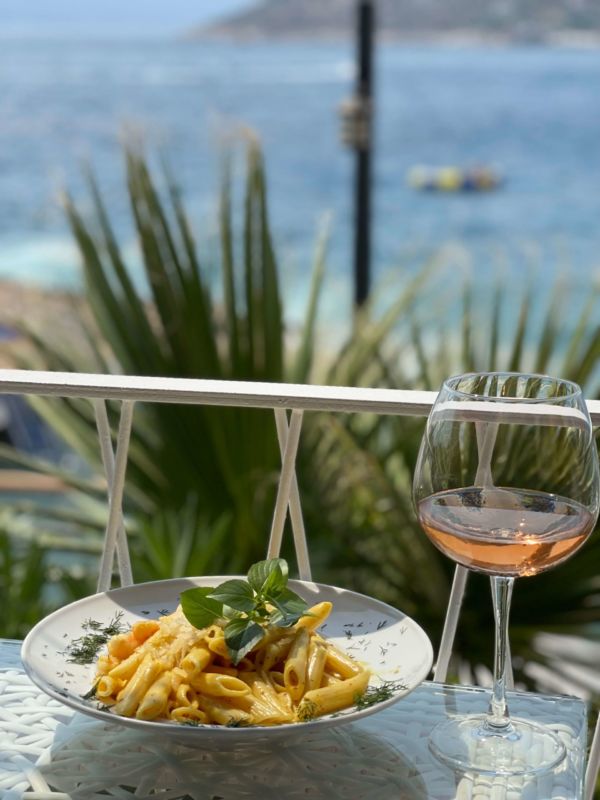 ‎Çakıl beach club Kalkan stands out for its tiny beach suitable for families with children located next to the platform area. You have ‎‎to pay only 100 TL per person to enter‎‎ the beach club. Sunbeds, umbrellas and parking are included in the fee. The beach club also offers water sports such as parasailing, hamburger and jet-ski. 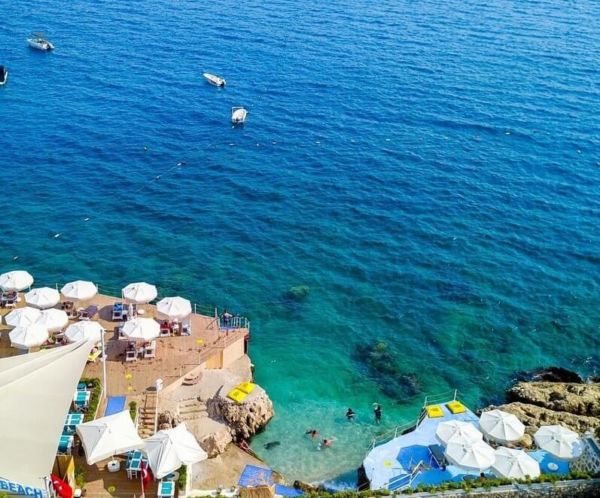 ‎Mahal Beach Club, which consists of platforms built on the slope of the hill, is located under olive trees in a position overlooking the sea from above. The sun loungers are spaciously distributed around, allowing you to enjoy the sound of the waves. Sunbeds and umbrellas cost‎‎ 60 TL per person at‎‎ Villa Mahal. Please note that if lunch is taken here, there is no sunbed fee.‎ 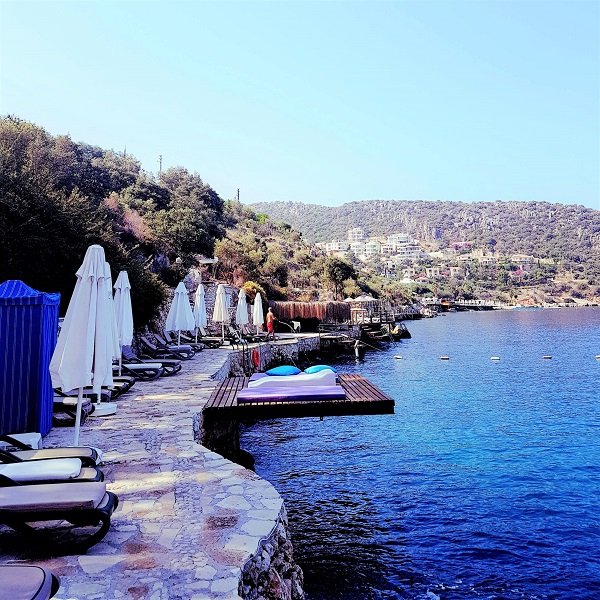 ‎Located near Kalkan Public Beach, Indigo Beach Club is a platform style beach club like many others in Kas Kalkan area.  Sunbeds and umbrellas cost‎‎ 120 TL per person at‎‎ Indigo Beach Club‎‎ which also has a café restaurant with a bird’s eye view of the sea.‎ 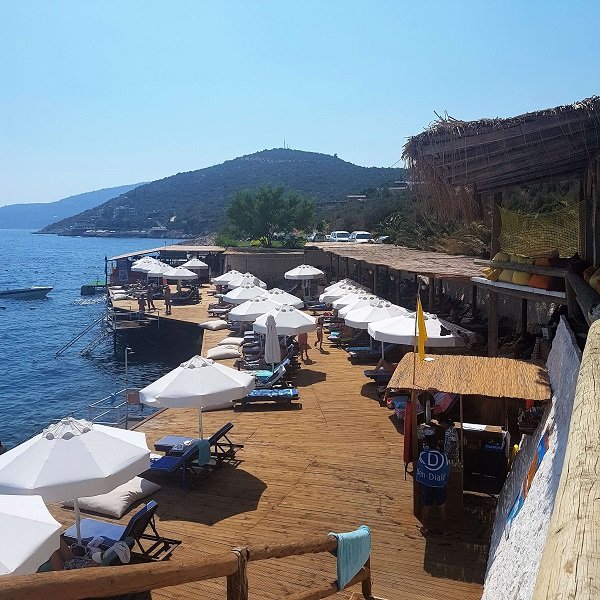 ‎Kalamar Beach Club Kalkan, one of the platform beaches in Kalkan, is a 10-minute drive from the center of Kalkan. ‎‎The entrance fee is 90 TL. Sunbeds‎‎, umbrellas, canoes, bicycles and trampolines are included in this price.  If you want your sunbed on wooden platforms, you have to pay 150 TL instead of 120 TL. There is also a café restaurant named Squid on the beach.‎ 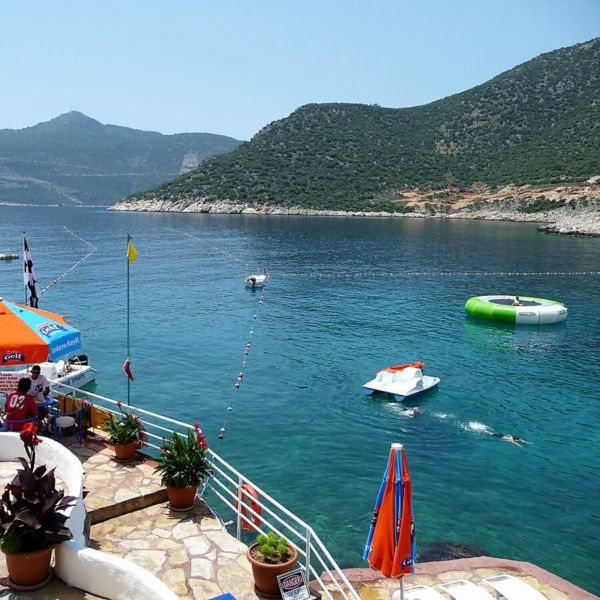 ‎Patara Ancient City, located 17 km from Kalkan, is one of the most important and oldest cities in Lycia. Patara Beach, which is located in the immediate vicinity of Patara Ancient City besides its archaeological and historical values, is also of particular importance as it is one of the rare beaches where Mediterranean turtles Caretta Caretta have laid their eggs and hatched for millions of years. The vast protected beach impresses with its thin sand and shallow sea. ‎‎You have to pay 90 TL to enter Patara Beach by 2022. Admission is free if you have a museum card.‎ 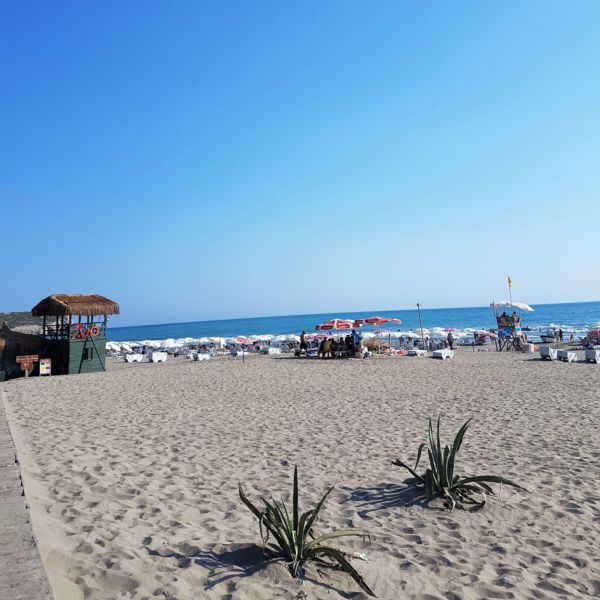